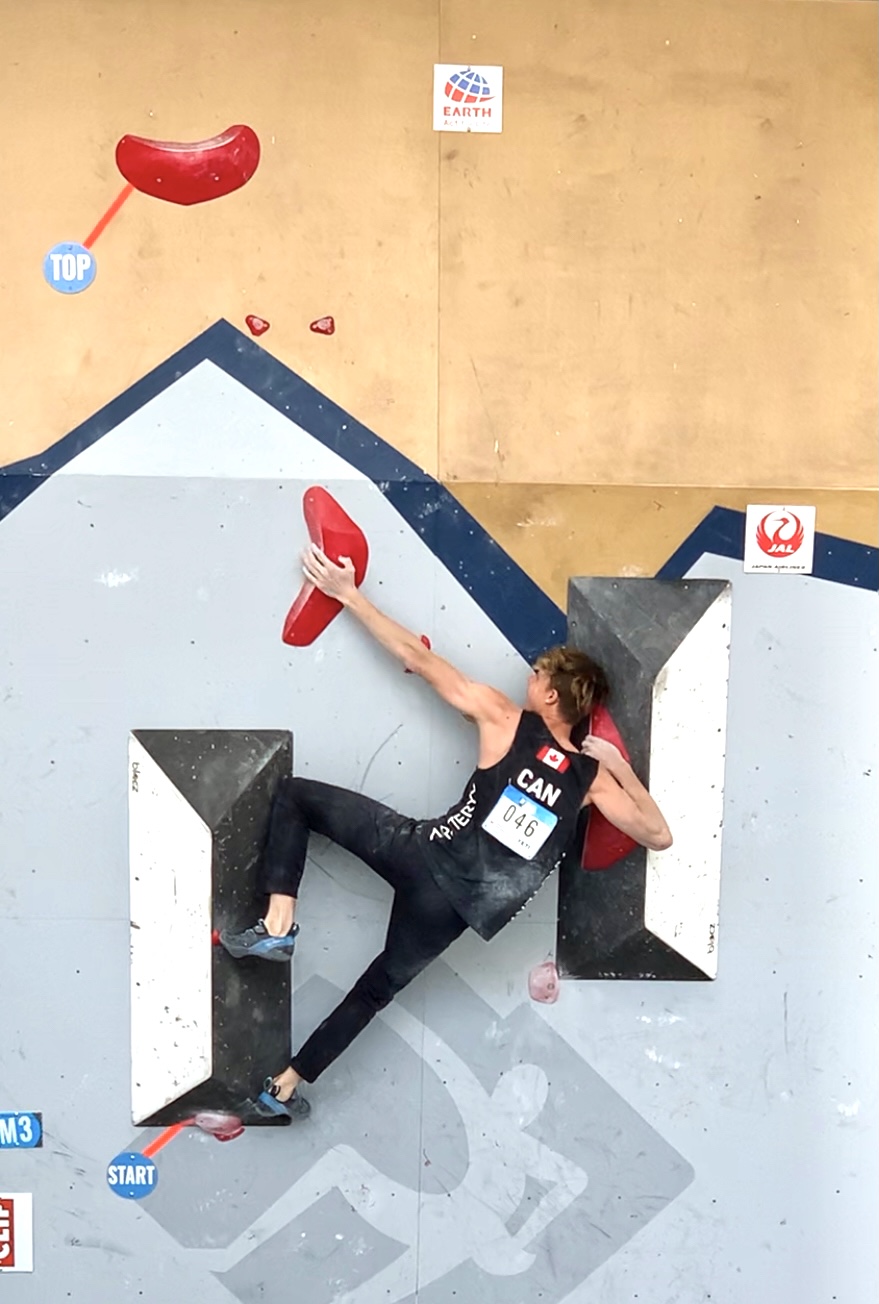 The World Cup in Salt Lake City, Utah, on May 28-30, 2021 saw four Canadians participating in the Speed and Boulder disciplines. As announced on April 12, only a few athletes were given the green light to attend this event, given the various states of lockdown in Canada.

Ethan Pitcher and Sean McColl participated in the Speed Competition on Friday, May 28.

It was Pitcher’s first World Cup Event, and what a performance! Ethan missed out on the final round by only 0.18 of a second, finishing 18th overall (out of 38). The story of this event may be the World Record having been broken TWICE (5.25 in qualification round, then 5.20 in the final round), but that’s not the only record broken on that day. Ethan’s 6.54 qualification round is a NEW CANADIAN record! Well done Ethan!

Sean McColl finished 33rd, with a qualification time of 7.81sec.

Congratulations to Aleksandra Miroslaw (POL) and Veddriq Leonardo (INA) on their respective wins.

Allison Vest, Sean McColl and Oscar Baudrand participated in the Boulder Competition on Saturday and Sunday, May 29-30.

Despite stating she is “disappointed” with her results, Canada is proud of Allison Vest’s performance this weekend! Allison shows tenacity and strength every single time she climbs. With 1 top and 3 zones, Vest was very close to the semi-final round. She finishes 29th (out of 51).

On the men’s side, Sean McColl made its first semi-final round of 2021, ranking 17th after the qualification round. Despite facing an appeal on problem 1, Sean showed his mental strength by coming back to the wall and topping the problem. His strong 1t 3z result was unfortunately not enough to get him into finals. McColl finished 19th (out of 55).

As for Oscar Baudrand, this was his second World Cup appearance, following last weekend’s event. These back to back events were a great learning experience for Oscar. He finished 40th (out of 55).

Congrats to Natalia Grossman (USA) and Sean Bailey (USA) on their respective wins. This is Grossman’s second boulder win in a row!

In honor of National Indigenous People Day, the ...

In honor of National Indigenous People Day, the CEC Inclusion and Diversity Committee invites you to add a Land Acknowledgement to your opening address of any events and programs. Check this template to help you create your meaningful script.

CEC has launched this week its first Para-Climbing...

CEC has launched this week its first Para-Climbing Committee. The committee will work to establish a para-climbing program in Canada.

Curious about Para-Climbing? Education resources has been put together by the committee, and more is to follow.
https://www.climbingcanada.ca/paraclimbing-program/

In the meantime, check out the @usaclimbing Para-Climbing Nationals this weekend! There will be livestream on Sunday.

One of the participants, Connor Gearey, is a dual USA/CAN citizen. Read about Connor on this bio by @dadley_can and cheer on Connor on Sunday!
https://www.climbingcanada.ca/connors-road-to-nationals/ ...

@arcteryx unveils new climbing uniforms for Climbing Escalade Canada. The black on is for World Cups and the white one is for the Olympics!

Check out all the photos via the link in bio.

Strong weekend for @allisonvest ! Only Canadian at...

Strong weekend for @allisonvest ! Only Canadian at the first stop of the 2021 NACS - and a second place finish!! Well done Allison 😃💪🔥💪 ...