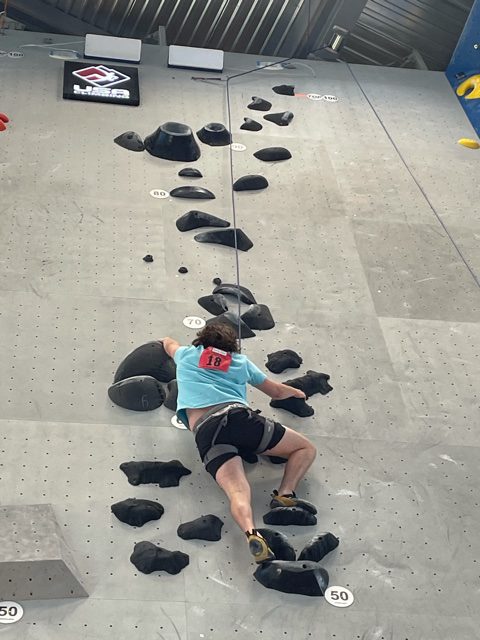 Salt Lake City is over 1900 kilometers from northeast Texas. Roughly half the distance of the entire United States, this journey is THE road to US Paraclimbing Nationals for 16 year old Connor Gearey in 2021. This road is a familiar one as Connor’s been to Nationals three other times. This road is also a completely new one for Connor as he steps into the adult category for the first time and steps back into indoor climbing with what he calls a “messy” year of training in 2020.

On Friday morning of the big weekend, Connor and his dad Wayne are packing up at home outside Dallas. Connor doesn’t speak as much, but does hint that he knows there’s a spot on the US Paraclimbing National Team (and World Cups) at stake for the weekend. He knows a hero of his, Justin Salas, will be competing right next to him as a B2 climber (and possibly “against” him depending on results). He also knows this competition will be one he’s taking on without his longtime coach Mario Stanley as his caller.

As a dual-citizen with Canada, Connor will compete on top rope in the B3 category for visual impairment. As his caller, Wayne will direct Connor towards holds and tiptoe a line of support while not giving away beta. “I’m on committees, I hold chair positions, but I’m not really much of a climber,” Wayne says. “Being a first-time caller, I’ll really have to listen to Connor on what works and what doesn’t!” Qualifiers are on Saturday and Finals are on Sunday–all climbers will be competing at Momentum Climbing Millcreek.

A climber who is blind, not a blind climber

To get technical, Connor has a genetic disorder that affects his retina; Stargardt macular degeneration that causes progressive vision loss (for him beginning around age 8). In his words, “I have a complete blindspot in the center of my right eye; a blind spot bottom right of my left eye. The rest is blurry”. For Salas, he’s likened his vision a bit to an older, static TV screen and relying heavily on his peripherals.

Born in Texas and spending a lot of time with family in Alberta, Connor speaks with confidence and capability about his life with Stargardt. He’s gone to the same prep school all his life with other able-bodied students, he uses a computer, texts on his phone. Combine this with some stories about skiing in a whiteout or riding ATVs, you’re not quite sure how to take it all. Not to mention a tradition of renting muscle cars with his dad every year for US Paraclimbing Nationals and joking about clearing the sidewalks if you see him behind the wheel. Fortunately you remember he’s 16 and these are all things most boys across North America would talk to you about, blind or not.

Keeping in mind visually impaired climbers are sometimes on the wall three times longer than able-bodied climbers, imagine if you can how their style has to adapt. They’re sometimes holding a lockoff to literally find the next hold. Depending on where they are in the route or the problem, this can add all kinds of factors to conditioning and strategy. Connor explained it well, saying “I’ve had my friends do dynos with their eyes closed so they actually get it. You’re throwing your entire body at something you can’t see!” he says. ” I don’t have the strength to make every move controlled, especially nearing the top of 50 foot routes. I’m sometimes making split second decisions to conserve energy”.

With over a decade of coaching and climbing experience in the Dallas area, Connor’s coach Mario sees his work with Connor as a privilege. “Connor is competitive, resourceful and has a love for the game.” he says, “He’s an all around great human being. As an athlete, he’s dedicated to the sport and wants to go far and also wants to make it accessible for more people”.

Mario’s nod to community is one that most climbers have but the paraclimbing world has it to a different degree. When asked about the competition, the mask requirement and the lack of spectators for 2021, Connor didn’t speak about nerves or results–he said these arrangements would give him a better chance to get to know the other athletes.
“I kind of don’t like all the attention; makes it harder to climb,” he says. “I think it’ll be pretty quiet there which will be nice”.

This isn’t to say Connor’s not a competitor, he definitely reflects passionately on his training sessions with his teammates in Dallas and isn’t just going across the country to make friends. He’s loyal to his coach and shows up to compete. “If Mario sees me not trying, he’ll call me out. That sticks with me because I’ll be pumped and throwing silly moves near the top and think ‘ah, I can’t let Mario see that!”.

Before he heads to the airport, Connor shares rather specific plans for his future. His dad Wayne has at least five schools on his resume and a PhD so that Connor has business school at the University of Colorado in his plans shouldn’t really come as a surprise. He chuckled when asked about outdoor climbing near Dallas; the rockies would be quite a change. Connor also has that Canadian citizenship in his back pocket so who knows where you’ll see him next. Wherever it is, his extensive experience as a competitive climber will hopefully move the paraclimbing sport forward and grow the community to new heights.

It has officially started! A small Canadian ...

It has officially started! A small Canadian delegation walked in the Opening Ceremonies of the 2020(1) Tokyo Summer Games! Reminder that @mccollsean @alannah_yip and coach Wilson are currently training in Morioka until the 28th.

Watch live on cbc.gem or download the CBC Gem app.

From Vancouver to Tokyo, now on route to Morioka ...

From Vancouver to Tokyo, now on route to Morioka for the pre-games training camp!

DID YOU KNOW? @mccollsean @alannah_yip and Coach Wilson have known each other for a very long time... as evidence with this 1998 photo! Their long lasting friendship will certainly be an asset during the Olympic Games!