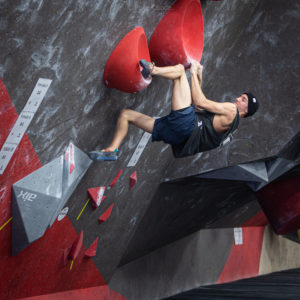 Ethan Pitcher’s climbing story begins with a trip to the principal’s office around age nine. “I basically got in trouble and was then recruited to a climbing team,” he says while speaking from his home in Fort Collins, Colorado. Although a spot that can often mean trouble, the principal’s office can also be a place where good educators help students think through and redirect their energy. Fortunately for Pitcher, his educator was World Cup climber Adam Markert. “I hadn’t even really met Adam as a teacher yet,” Pitcher says, “I was climbing the building of the school to get all the kickballs that we’d put on the roof and I guess the adults didn’t like that.” Turns out, Mr. Markert did like that and he brought Pitcher into his climbing world at the Vail Athletic Club. Fast forward a bit to 2019 and now Pitcher is competing in speed climbing in Arco, Italy on the Canadian National Team hungry for sponsors.

A Kid in the Mountains

Moving from Newfoundland to the Vail area at around age three or four, Pitcher basically saw the Rockies as his home. Local and provincial results may show his name in the Canadian Rockies as a high school student, but the early days of Pitcher’s climbing were on the cobbled streets of Vail Village. The Vail Athletic Club’s wall is a rather modest facility for a present-day speed climber. “Yeah, it was a bit of a broom closet but it was great for learning bouldering and technique,” he says with a chuckle. Coach Markert used the walls there to infuse fun and a love of climbing that he always brought to competition climbing himself. Even as an award-winning educator, Markert also has quite a climbing legacy branded with some wacky energy. He has said, “You really shouldn’t take it that seriously. I mean come on, it’s plastic. When climbing gets too serious, the kids get too serious, and climbing becomes a job. Work. Forget that! Kids have enough work in their lives, climbing shouldn’t add to that.” Coaches can make or break sports for young athletes; Pitcher thankfully met Markert at a young age and still loves climbing. It’s also worth noting that Pitcher started bouldering competitively at age nine with Markert as his coach and made nationals that first year.

A lot of younger, highly-competitive climbers often focus early and end up rather one-dimensional in their relationship to the sport. With Pitcher, he can reflect well on many stages in his journey. While acknowledging the benefits of cross training, he avoided such mountain lifestyle staples like skiing and biking so he could stay free of injury for climbing. He also talks of taking the sport more as a hobby through high school. Finally, you can get him to light up explaining his “ah-ha” moment for that taste of speed.

Pitcher entered the Canadian competition scene on a whim in 2018. They were going to visit family in Alberta. “We were packing up and I thought, ‘Hey, I wonder if there are any climbing comps while we’re there?’ and it turns out there were.” After competing in the local and then provincial competitions, Pitcher earned a spot in May of 2019 at the Canadian Nationals hosted in Montreal. He won a silver medal not just for his age group but also in the Open category, earning two invitations to Team Canada’s National Training and Selection Camp. “I love competing in Canada; totally great energy!”

A New Relationship With Climbing 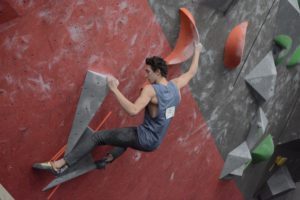 Since taking climbing more seriously, Pitcher often has to travel far for his training needs. Whether it’s EarthTreks near Denver, Eagle Climbing near Vail (where he worked as a cleaner briefly) or his now-home gym G1 in Broomfield, Pitcher’s best practice is on a proper speed wall with the signature hold set, though not every gym has this.

At home, Pitcher has a workout space. He lights up when asked about the conditioning program with CEC’s Head Coach Libor Hroza. “Oh man, I love it. Libor knows what he’s doing. Technique stuff I can do later when climbing or competing with friends or speed workouts on my own but this strength building and core work is insane.”

For a speed climber whose first touch on a real speed wall was at his first competition, Pitcher’s willingness to try new things and immediately excel is a little baffling. “I remember at boulder comps growing up, they’d have a bunch of jugs on the wall off to the side for speed but it was nothing like it is now.” He says his first official time on a speed wall was somewhere around 15 seconds but he didn’t really keep track. Needless to say, that 15-second mark isn’t in a frame today.

Aside from logging miles on his car, Pitcher’s also metaphorically pretty far from his early days of fun and games in Vail Village. Things like training loads and injuries are aspects of climbing he’s not really experienced before. Scrapes and bruises are basically expected. The texture of modern gym walls can wreak havoc on your knees, fingers and elbows as you strive for upward flow. Pitcher laughs about climbing shoes and the precious, thin skin rubber of his favourite Scarpa Furias. “They’re like slippers or socks,” he says. “I love them but just can’t do it for speed training.” He says he’ll go through a pair of training shoes probably every other month now.

Although an avid outdoor climber and no slouch on boulders in particular, Pitcher talks of bouldering like it’s a whole other sport. Even little things like how to care for your hands is different to a speed climber. If you watch how Pitcher starts a speed climb, where the real momentum is getting off the ground, his hands match early and his fingers stack in a way that has absolutely ripped his cuticles. To an outsider, this could sound petty but climbers need their fingers. He says, “Pulling off that hold to go up with my fingers on top of each other? I don’t know what happened but that rip was the grossest thing I’ve seen. I really don’t want to do that again.”

Pitcher enjoys watching movies in his downtime. Hayao Miyazaki’s Ponyo is among his favorites. In the movie, the main character runs atop cresting waves parallel to a road; a portrait of joy. Finding true flow, she’s as free from shoes as she is from the laws of nature. If Pitcher keeps close tabs on his history with good coaches (and kickball of course) and holds that visual of a supernatural anime character running on waves, he may find new heights as a speed climber on the competition scene, both at home and abroad.