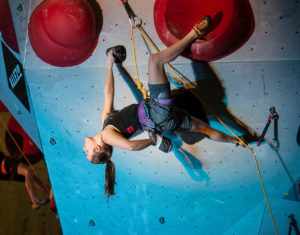 Inspired by her dad’s climbing, Indiana Chapman started climbing at a gym at age 7 and fell in love immediately. “I was a very athletic kid, always trying different sports, but I had a natural urge to climb things whether that be my bunk bed, the walls of our house, or the monkey bars at the park,” she says. The love she had for climbing must have been something special because she came in dead last at every competition during her first competitive year and yet returned the next year to claim her first national championship. Since then, Chapman has traveled far beyond the participation ribbon, consistently winning her age category with a smile, a sense of gratitude and a playfulness that has her either joking with friends or hopping on the Men’s Open climbs immediately after the competition is over.

Outside of Ontario competitions, Chapman carries that same positivity with a maple leaf on her back in places like the USA Nationals, Russia, Austria, France and Italy, among others. At her first Youth World Championships in 2017, she went from casually strolling the streets of Innsbruck with her family by day to drumming an unsuspecting crowd of onlookers into a frenzy at night. She speaks of an excitement not many 14-year olds experience. “I remember that competition so well, because the support of Team Canada was outstanding. Everyone was so happy for me and encouraging, and the atmosphere was overwhelming. That was the competition where I realized what I was capable of,” she says. Chapman finished 4th in the world that year in bouldering, solidifying herself on the world stage.

All on the Wall

Competition climbing has played a large part in Chapman’s young life; over half of it, actually. In 2016, she even dipped into CrossFit reaping the benefits of cross-training and trying new methodologies for endurance. Dropping the heavier and more dangerous aspects of CrossFit, Chapman has benefited greatly from her adaptation of the sport which can be seen in ascents of the steep, burly and powerful boulders she’s been climbing in 2020/2021. She also says complementing a busy training schedule with other activities is a huge benefit: “Hobbies like gymnastics and brazilian jiu jitsu have helped me with body awareness, and yoga has also helped me with mindfulness and flexibility.”

In competitions especially, that mindfulness to stay present and find and exude joy is no small feat considering the amount of stress and pressure a young competitor faces.  “The best moments I’ve had in competitions are those when I am not concerned with results, but simply enjoying myself and leaving everything on the wall,” she says. “I know that if I try my best and enjoy every second, I will do well and reach my goals.”

Long drives to Michigan for big-wall endurance experiences and longer drives to the Red River Gorge in Kentucky are all too-familiar to this Ontario resident. As someone who fully-transitioned to online schooling in 2018, Chapman is accustomed to a rather unconventional schedule balancing things like high school, spending time with family, a growing list of sponsors and rigorous training to keep her sharp.

“Indiana genuinely dislikes doing anything else with her time,” her Coach and dad Matt Chapman says. “Trying to improve, work her weaknesses, and obsess over climbing and training is what makes her happy. As a coach, I am continually finding and creating new ways to improve old ways of doing things. I love the science and creativity of this process, and Indi is always open to exploring growth concepts. It makes our training sessions fun, every time.”

One of the words Chapman uses to describe herself is tenacious. Competition climbers must have this quality as the sport inherently presents challenges that become more difficult; sometimes not necessarily even on the wall.  She learned this in a very real way in October 2019 when she tore her lateral collateral ligament in her right knee. Hearing a pop while heel hooking during training, she knew something was not right. At the time, she said, “This whole experience is going to be a great test of positivity and patience.” Within four months, Chapman was back, training without a knee brace. Putting in two-hour sessions on the moonboard and with a newfound love of hangboards, she adjusted herself to a more powerful style of climbing. “Obviously this injury was devastating at first, and it was very hard missing out on competitions. But I grew so much from the experience. I worked really hard on other areas that I could focus on, such as my upper body and finger strength, and more importantly, I realized how much I loved climbing. My injury started out as a setback, but it made me work harder and fall more deeply in love with climbing.”

When getting to know someone, it’s hard not to go straight to her social media channels. With Chapman, it’s refreshing to find more than a picture of her climbing; you’re just as likely to find a sample of a new song she’s writing or a snap of her go-to oatmeal, blueberries, and bananas. Yes, Chapman’s got her share of weight vest workouts, sponsor shout-outs, cringe inducing flexibility feats and try-hard faces 50 feet up on a lead route, but she’s also not above posting a clumsy tumble 6-inches off the ground to remind us that climbing is supposed to be fun. Matt puts it well about the potential pitfalls with social media saying, “Indi strives to be as honest and real as she can, and offers encouragement to others.”

Chapman and her dad are super close; they emanate positivity, fun and joy whether at the crag or pulling plastic indoors. These tenets serve as a strong foundation for their coaching and familial relationship. At age 11, she jumped on the 5.14d route Dreamcatcher in Squamish for a Mitsubishi commercial with Dad on the other end holding the ATC. To say she’s “new” to a certain level of fame wouldn’t exactly be accurate. These two Chapmans show a grassroots entrepreneurialism unique to the climbing community and Indiana is happily front and centre.

Time spent cooking and goofing around with younger sister Picabo and a deep commitment to spirituality help to serve as additional driving forces for this mature and growth-minded young woman. While we didn’t get a chance to converse in real time, I can only imagine the pride and joy in her voice: “My mom and dad are my biggest inspirations and supporters. I admire everything about them, and I would not be who I am or where I am today without their love and encouragement.”

MEET the TEAM! The Senior National Lead Championships are happening this week - November 27 + 28. This is your setting team making it happen!

Congrats to our 2022-2023 Senior Boulder National Champions! Thank you to all who helped make this amazing event happen.

Looking for photos of Boulder Nationals? Check out...

Looking for photos of Boulder Nationals? Check out this drive folder from @flashfocused and @jocelynsahli Help yourself to any photo and remember to tag the appropriate photo credit!

Massive thanks to the @boulderzclimbingcentre team...

Massive thanks to the @boulderzclimbingcentre team for hosting Boulder Nationals! We couldn't do it without our dedicated gym partners and they have gone above and beyond to ensure athletes, staff and volunteers have a great experience. Thank you!