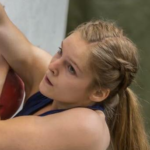 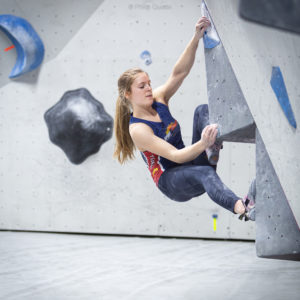 I don’t know if BC-born climber Sophie Buitendyk has read journalist David Epstein’s books but she should. They’re basically about her. His first book The Sports Gene, to oversimplify, goes a long way to say that elite performance is a combination of nature and nurture. Buitendyk grew up in a competitive household, with two brothers, one of whom is a fraternal twin who is 10″ taller. She’s also a natural athlete: as a younger climber, she juggled dance and gymnastics and now balances a full year of snowboarding and climbing. She seemingly does these with ease, freedom from injury and quick mastery.

Epstein’s second book Range champions the generalist’s triumph in a world of specialization. Not just about athletes, there are case studies, anecdotes about jazz musicians and a broader focus on learners. As an athlete who has medaled in all three climbing disciplines, Buitendyk is also a student at the University of Victoria majoring in Kinesiology. With a joyous and grateful tone to her stories, she humbly recounts her glory days as a perennial CEC Youth podium finisher even as she anticipates new possibilities for herself both on and off the wall.

Having worked with her through two World Cups in France, Youth World Championships in Italy and a Lead National youth title, her coach Matt Chapman says, “Sophie is as strong as they come right out of the box. Her work ethic and desire to excel is just bonus material.”

One thing Epstein stresses in his books is a learner’s ability to know herself. By getting into new situations and reflecting afterwards on the experience, she can synthesize what she has learned and move forward. She can also simply rest if that’s what’s best for her progression or maintaining her enjoyment of the sport.

Riding high on a Tour de Bloc Open category win at BoulderHouse in Victoria in March 2020, Buitendyk knew the climbing world was about to change and that she had some choices to make ahead of her. “Growing up in Abbotsford, I always snowboarded a few days each season,” she says. “But doing a full season as a staff at Whistler is something I’ve always wanted to do before but couldn’t because of my commitment to climbing.” She said she can’t imagine living where she does and not taking advantage of the outdoors. There was slight hesitation when I asked about the risk of injury but that feeling was overcome by a ‘are you kidding? It’s Whistler’ conclusion.

The fact that Buitendyk also now identifies as a snowboarder gives her a whole new realm in which to learn and relate her climbing movements and body awareness–new knowledge applied to new contexts means a killer combination of strength and creativity in any of the activities she engages in. She also gets to test out this “maintenance training” by hanging off the sweet, sweet granite of Squamish, her other backyard.

With words that would make Epstein (and probably her parents) proud, she says, “As much as possible I give myself a day of rest each week. I also call my coach weekly to discuss the week ahead and make adjustments to my training schedule when necessary. This way I have a specific plan each week that fits in with the other commitments in my life such as school and work.”

Though she now calls a few gyms like Base5 and Whistler Core “home,” Project Climbing in Abbotsford was her first. She visited the gym with her family during a Spring Break, but she took to it quickly and begged her mom to let her join the youth team. Buitendyk mentions that her twin brother, six minutes older than her, was the athlete but not with climbing; that one was hers.

Tara Tilling, co-owner of Project and Buitendyk’s first coach, remembers the youngster’s first climb at the facility in 2009. “She worked on it hard,” Tilling recalled. “After a year it was pretty evident that she was super-motivated, a hard worker and you could see her going places.”

Something Buitendyk also picked up from her time in these gyms is being on the other side of competition as a youth coach. “I found explaining things to a younger climber actually a bit more difficult; it’s not something I’m used to,” she says. Now as a competitor however, she draws from this experience and sees the real value of coaching on another level.

As mentioned and evidenced by her record, competing is not the difficult part for Buitendyk’s climbing life. Speaking of another Tour de Bloc in 2015 at the Hive, she says, “This was the first time I competed in the Open category. I was one of the youngest [15] there and I just wanted to have fun and try hard. In the end, I walked away with first place and a $1000 cheque. This was a really special moment for me and gave me hope that anything was possible.”

Sophie Buitendyk is an athlete that echoes a mantra of detachment from results, focusing rather on her presence of mind and having gratitude for the opportunity to compete.

Competition day means tying a tight ponytail, slipping into her LaSportiva Skwamas or Solutions that she knows so well, and focusing in on the routine of the on-deck chair and the beeps of the World Cup format. The way she speaks about these simple things and her track record for success show how much of her life works with this approach. Adjustments will always happen but keep the recipe that works and we’ll be reading about Sophie for years to come.

MEET the TEAM! The Senior National Lead Championships are happening this week - November 27 + 28. This is your setting team making it happen!

Congrats to our 2022-2023 Senior Boulder National Champions! Thank you to all who helped make this amazing event happen.

Looking for photos of Boulder Nationals? Check out...

Looking for photos of Boulder Nationals? Check out this drive folder from @flashfocused and @jocelynsahli Help yourself to any photo and remember to tag the appropriate photo credit!

Massive thanks to the @boulderzclimbingcentre team...

Massive thanks to the @boulderzclimbingcentre team for hosting Boulder Nationals! We couldn't do it without our dedicated gym partners and they have gone above and beyond to ensure athletes, staff and volunteers have a great experience. Thank you!